WHERE IT ALL BEGAN

Our interest in EMFs began back in the late 1980’s when our much loved, 8-year-old arthritic dog named ZAC started to suffer liver failure, caused by the drugs prescribed by the vet for his arthritis and seizures. The vet did not expect him to reach his 9th birthday. Regardless, we were determined to save his life. Remembering how my Grandmother used magnets for her arthritis, I ventured down that road. I sourced strong magnets and made a magnetic collar for him to wear. Within 2 days he was up, running and jumping without pain. It far exceeded our expectations. He was no longer disabled and surprisingly – the epileptic seizures stopped also. Zac wore a magnetic collar 24/7 for 7 years and died at age 15 of plain old age. In the Doberman world, this is longevity personified. Today, I truly believe the collar not only saved his life but also extended it far beyond what it would have been naturally. I would recommend a magnet therapy dog collar to anyone with a pet with arthritis, hip dysplasia or seizures. 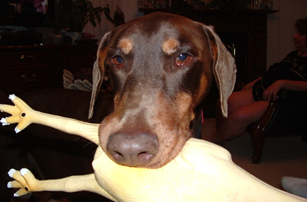 After this, I became fascinated with the healing properties of static magnets, and pulsed electromagnetic fields (PEMF). I read everything I could find to better understand the principals and science behind the healing capacity of same.

In the end, I found that the healing potential in Zac’s collar was down to the magnetic polarity used on the body, the strength of the magnets, the position of the magnets around his neck, and the fact that he was wearing his collar 24/7. I had placed many strong (1250 gauss) ferrite magnets with the north (–ve) polarity side to his body and put it around his neck. The magnets sat over the arteries in his neck. (refer the diagram below). Healthy cells within the body have a (-ve) charge. The magnetic energy emitted from the collar resonated with the cells, charged the fluid in the cells, improving oxygen utilisation, improving blood viscosity, getting the blood and oxygen flowing freely around his body. Basically, Zac’s immune system was charged to a level that meant his body could start healing itself. And because Zac wore his collar 24/7, his immune system was kept running at that optimum level. I believe this was the secret to his longevity. 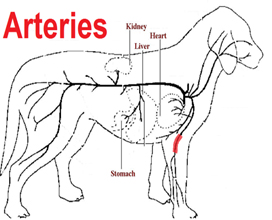 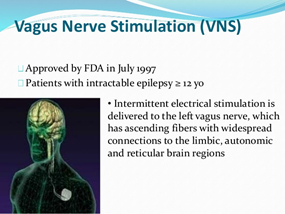 The best thing we ever did was taking him off the vet meds that were killing him. Replacing them with the magnetic collar. By doing this we had given him another 7 years of quality life without arthritis pain,  seizures or side effects.

We believe the seizures were stopped by the stimulating effect the magnets had on the Vagus nerves. There is a Vagus nerve running down both sides of the neck where the magnets sat. The left Vagus Nerve sends signals to the part of the brain associated with epileptic seizures. The right Vagus Nerve stimulates the heart.  I believe the stimulation from the collar improved the signalling from the Vagus nerve to the brain. This is what effectively stopped Zac’s seizures. Today I am even more convinced of this because they now use implants to do exactly the same thing, as shown in the image to the left. The difference being – Zac didn’t need expensive, invasive surgery.