The manufactures of the Tesla devices have trialled their devices on Humans, Chickens and Cows.   This was done deliberately to prove that any advantages were not caused by ‘the placebo effect’ (mind over matter).  As such an effect cannot be attributed to Cows and Chickens.

10 people of various ages and state of health were selected.

The trial was carried out over a period of 43 days.

Urine and blood analysis testing was performed before, during and after the trials. Urine and blood testing are an accurate way of measuring organ function and stress levels within the body. Testing was carried out before day 1 (before), on day 3 and 13 (during) and after day 43. 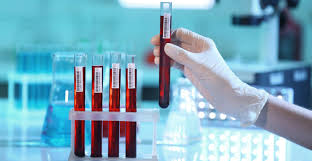 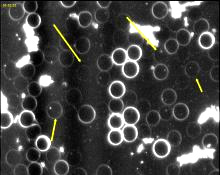 The membranes of the red blood cells are weak and hosting (exploding). Parasites are evident.

The red blood cells have recovered, no more ghosting (exploding), and the majority of the parasites eradicated. This is a great result considering the subject had a cold. 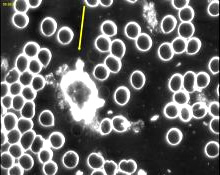 Parasite activity and crystallization are evident. The red blood cells are slightly irregular and not flowing as freely as they should. 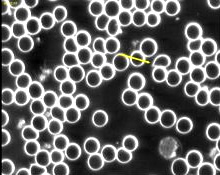 After
The red blood cells have recovered, with a nice shape, are flowing more freely and evenly dispersed, with no crystallization.

The tester commented on how the BEFORE slides showed high levels of inflammation and oxidation.    The AFTER slides showed huge improvements in both.  The number of Lymphocytes (white blood cells) went down from 25 to 15, demonstrating a lowering of stress levels in the body and a normalisation of the immune system.

The urine testing also showed significant improvements. The graphs below show changed organ function rates. The red demonstrates the positive effects participants showed whilst using a Blushield EMF Protection device. Demonstrating the benefits gained when you successfully remove the ongoing stress of EMF radiation from the body and the re-introduction of the natural coherent Earth signals no longer available to us naturally at the required levels. 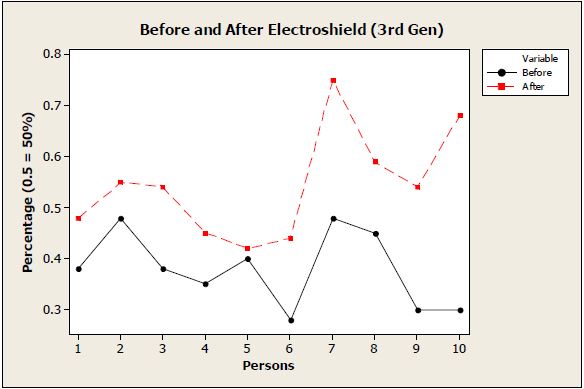 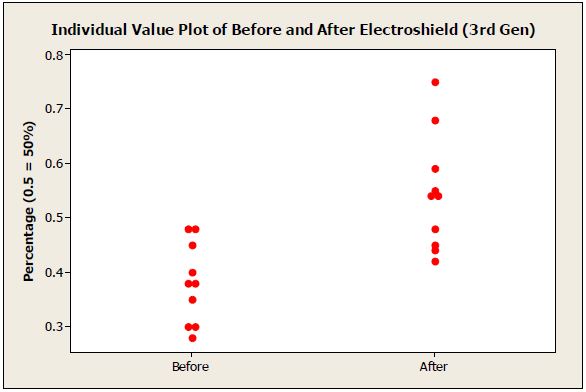 The following follows the improvements of all 10 of the participants:

The trial was carried out at the Braemar Poultry Farm, Te Puna, NZ, involving one of the two chicken sheds containing over 10,000 Shaver laying hens during the trial period. Tesla home Plug-in protection devices were placed in the trial shed. Shed 1.

The 2nd shed was used as the control group.  The trial was conducted over a 12 month period.

Testing included Blood analysis, parasite levels, feather loss, weight, skin rashes, egg weights and size, number of eggs laid, shell thickness and yolk quality. The monthly mortality rate was also monitored. Testing was performed before, during (after 1 and 3 months), and finally after month 12 at the end of the trail.

Five hens within every 10 metres of the shed space were selected for each test.

Before the Tesla home Plug-in devices were installed:

After the Tesla home plug-in devices were installed:

Within a day or two:  the noise level in the test shed was noticed to have dropped significantly. Indicating the chickens were much less stressed and more relaxed within their environment.

Most parasites had disappeared from the blood.

The blood cell count had evened out.

The general health of the birds seemed to have improved all around.

The mortality rate was 0 (no deaths).

The hens were much more docile and easier to handle, with less pecking and cannibalistic behaviours.

The size of the eggs had increased slightly, by 1mm average.

The shells had strengthened. Determined by a crack testing.

All parasites had now completely disappeared from the blood.

All other stats were the same as for month 1.

Still no signs of parasites in the blood. Great health result.

The general health of the hens was better than when the trial started.

There had been much less aggression and cannibalism among the hens.

Noise levels were still extraordinarily low, with less pecking of each other.

Less food was consumed by the hens in the test shed whilst the egg production rate and egg quality rate had increased.

The egg quality was consistently high throughout the trial.

The average egg weight increased from 63 grams to 66 grams.

Crack testing was consistent throughout the trial, indicating the shells were stronger.

Hens laid for longer, so there was a saving in hen rotation rates.

Increased Earnings to the Farmer:

After the 12 month trial, the farmer made an extra $16,434.00 from the trial shed,  from the reduced mortality rate alone.  The cost of the EMF Protection Devices was paid for within the first month of the trial.

This was an amazing result.  Not only were the hens much healthier, but the earning capacity of the farmer was amplified by an incredible amount. The results could not have been better.

The trial lasted several months.  Where Tesla devices were used then removed to compare the results.

Before the trial: The average somatic count was 360.

During the trial: The average somatic count had reduced to 140.

Another fantastic result, proving the health benefits without a doubt. In fact, the somatic count was reduced by more than 60% whilst using the Tesla protection devices.

These trials more than proved the potential health benefits that can be realised just by re-introducing native type signals back into your local environment, when the correct frequencies, pulse rates and waveforms are deployed.  It is just like turning the environmental clock back to 1980.  Or like applying a tuning fork to the body. Who wouldn’t want to do that?

And remember we are so confident that you will love our EMF Products that we offer a 30-day satisfaction money back guarantee on all our EMF Protection Devices. So you can buy with confidence.  (this offer excludes postage costs)